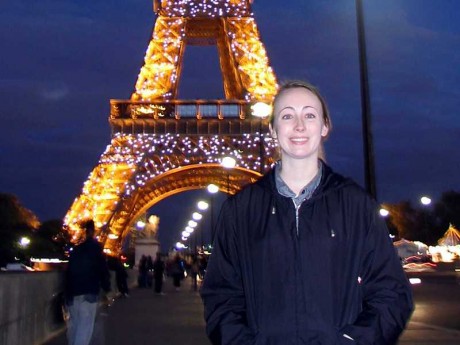 We got a room on the 6th floor of a hotel a few blocks from the station. The streets are narrow with cars parked in every available space. Streets run into other streets at different angles than right angles. The biggest intersection between our hotel and the nearest Metro station had six streets intersecting, cutting each corner into pie wedges. As the intersections were being worked on, this made navigating a challenge. Night At The Tower

The first evening we set off in search of the Eiffel Tower. We took the Metro all the way to the Ecole Militaire, where we walked down the Champ de Mars as the sun set. The Eiffel Tower is lit with amber lights at night and glows from far away. We walked beneath the four legs and looked up through the center, then on through and across the Seine. As we crossed the bridge at 8:00 PM the Tower lit up with a dazzling light show, thousands of strobe lights flashing from the top to the bottom and the searchlights revolving around the top spearing into the night. After visiting Versailles, we came back into the city and went for a stroll down the Champs Elysees. We started at the Franklin D Roosevelt Metro station and walked to the Arc de Triomphe. We stopped in some of the car dealerships like Renault, which were like little autoshows, and looked in the windows of the fancy jewelry stores and clothing stores. The View from the Arc de Triomphe

When we reached the end of the road, there was the Arc de Triomphe. It sits at the nexus of twelve streets. There is a six lane traffic circle running (screaming) around it. We took the subway beneath the street. We climbed to the top and looked out over the city of Paris. The city is full of lights, from the Basilique du Sacrè Coeur on the hill overlooking the city to the lights along the dark ribbon of the Seine which flows by the Eiffel Tower. The Eiffel Tower has a dual searchlight beam which rotates and catches the eye, as well as being lit in brilliant orange. But it was very cold and damp at the top of the Arc! After visiting Notre Dame, we got souvenirs at the Hard Rock Cafe and hopped a high speed TGV train to Avignon in the south of France, arriving in the evening. We planned on visiting the Pont Du Gard, a grand Roman aqueduct. After a short bus ride from the train station, we walked the narrow streets, following our guidebook, looking for a room to spend the night. We met a man from Oklahoma managing one of the hotels.

Unfortunately, we woke to a transportation strike on the next day. No buses, no cabs, no trains (except TGV). We walked about four miles back to the train station, took a train back to Paris, and waited on a train to Lyon.