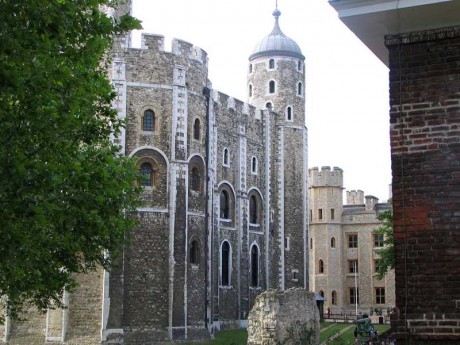 The Tower of London was begun in 1066 to maintain control of the conquered city. It has been and arsenal, a prison, and a royal residence. The White Tower is the center of the fortress and still holds a collection of weapons and armor. The Tower is also home to the Crown Jewels. A great portion of the Tower’s arms are still on display within. The unbelievable number of guns has led to some creative racking. There are suits of armor for men and horses, and shiny swords, pikes and axes on the walls. The old rough stone is cold to the touch. Fortress on the Thames

The Tower is a fortress, built for defense. There is a large moat between the inner and outer walls which is fed by the Thames. Since it is next to the river, the Tower can never be completely surrounded by troops. This also allows both royalty and prisoners to arrive by boat.