I left Monday morning in the rain. The drive to Davis, WV would take about 3 hours according to the map. I drive a bit slower in the truck.

As I crossed the eastern Continental Divide, the rain cleared. The sun peeked from a cloudy sky. I found my lodging at the Bright Morning Inn. After checking in, I headed out to my first location on the Blackwater River. 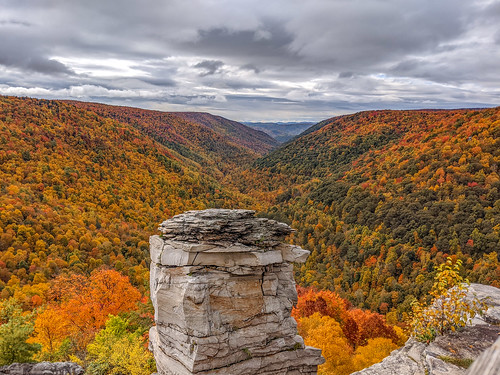 The Lindy Point Overlook is at the end of the paved section of Canaan Loop Road. There’s a small parking lot, which was overrun with cars. They lined the road to the trailhead a dozen cars back. The trail leads through rhododendron forest to a wooden overlook high about the Blackwater River. Braver souls than I, or less wise, ventured out onto the rocks near the cliff edge.

I made my first painting of the trip that day.

A late dinner led early to bed. I woke before dawn to rain. I went back to sleep.

About 8:00AM I checked the skies again. The rain had eased to a drizzle. I set out for the spot I found the previous day, an easy hike to an overlook of Blackwater Falls. 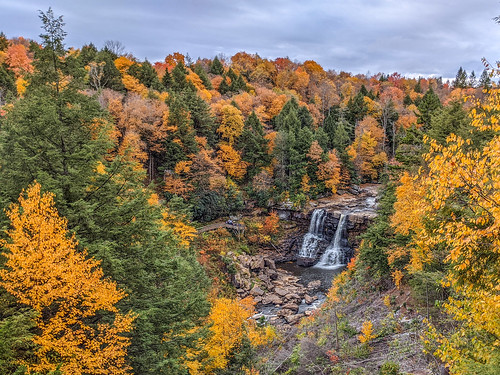 I carried my case of paints, tripod and canvas to the overlook. It was mostly sheltered by the trees all around. I made a quick sketch of the falls. Already a light dampness was present on the white sheet. I squeezed paint onto my palette and began.

Impasto describes a method of applying paint to canvas in thick strokes, leaving globs and ridges of pigment on the canvas. It’s my preferred method of mixing paint. I can make smooth blends between two colors. It was needed this time to prevent this painting from becoming a watercolor.

I hurried through blocking background colors of green, yellow, and brown. Hardcore photographers came with cameras and umbrellas and observed my work and the conditions. They wiped rain from their lenses. My task was fraught with tension, as the thinnest layers developed tiny runs from the drops I could not remove.

I put the finishing touches on the tumbling water of the falls. Then I hurried the canvas back to the truck to dry. A painting with a story was done.

After a leisurely lunch, and a hot shower, I set off for the wilderness. I got a little lost.

The particular overlook I was hunting for is not marked on my electronic maps. With no address to plug into the GPS, I was following my turn and distance notes. Once I’d gone past my expected mileage without the expected signs, I turned back. I found a sign leading to the area I was looking for. It was the road to Bear Rocks Preserve. The long way around Dolly Sods Wilderness lay ahead.

I had not planned to go to the top of the range. I’m glad I did. The heath and bogs were such a surprise. And the wind too. Like on Mt. Washington. The wind is fierce and cold and damp and unrelenting. I put on my heavy coat and roamed a bit.

Leaving Bear Rocks from the far side, I found a hilltop looking down the road toward my original destination. The landscape had changed from heath to alpine forest. I stopped for my second painting of the day. Then I drove on to the trailhead a few miles down that road. 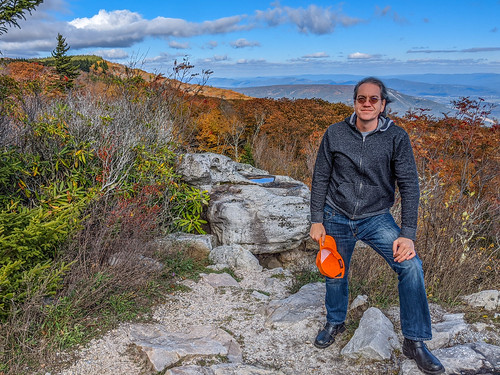 The land around the Monangahela National Forest is rolling hills dotted with farms. The roads curve up and down and round the terrain. Little vistas lay around each bend. But sometimes the sight is so pretty you must stop. And now, take a picture too.

I found just such a bucolic scene. Heading back to camp for the night held one more surprise, when I thought I had seen my fill of hillsides covered in autumn glory. Topping the crest of a hill, I spotted a lone barn in a grassy field nestled between steep slopes of yellow and orange beneath clouds of white. I’d found my last scene of the day. 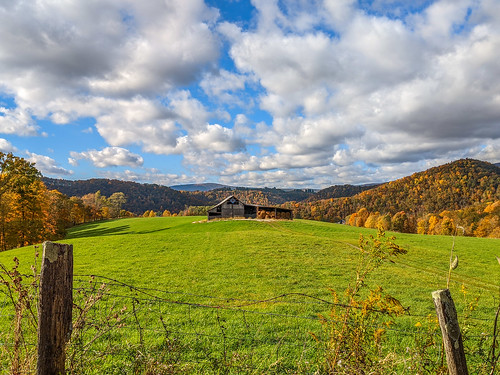 I pulled over at the next dirt road and hiked back to see the field. I set my easel there on the gravel margin and tried my best to capture the glory of the light and color and clean air. And that one turned out alright.

I painted two more days on my trip. I saw more tourist sites. The weather held, and the leaves clung to branches until I left. But none of those interludes reached the crescendo of that lonely barn, under that blue sky, on the back roads of West Virginia.