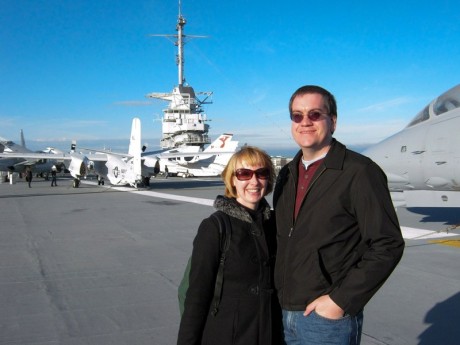 The pride of Patriot’s Point, the USS Yorktown stands guard over many ships in the marina in the northern part of Charleston harbor. We visited the destroyer first, which seemed very conventional in layout, with large rooms the width of the ship. I wasn’t as keen on the submarine, as I constant duck my head and scan for metal to knock it against. The various decks of the carrier form a maze. The deck plates have arrows to the next hatch or ladder or turn to follow a particular tour. Joy and I spent hours walking the tours and peering into the rooms. So many pipes, cables, dials and motors cling to the walls and floors and ceilings. I enjoy most seeing the aircraft. Most of my favorite planes launched from carriers, and I could name many of the planes on display. After a few hours wandering below decks we emerged into the sun and breeze of the flight deck. We climbed the Island and then strolled among the planes.