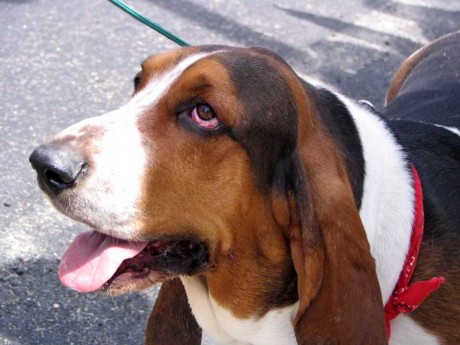 The 21st Annual Do Dah Parade in Ocean City, New Jersey featured over 400 basset hounds in the Basset Hound Waddle. We got a great seat on the curb in front of the Post Office. These friendly dogs came up to us for a petting as they waddled down the street. I really love basset hounds. They are gentle and mildly comic. They fit right in with the Do Dah Parade. The parade route is a long way for dogs with short legs to travel. Even at our point in the parade, the dogs had begun to tire. Cute costumes are a big part of the fun of the parade. Some of the outfits were very creative. We moved to the boardwalk to watch the second leg of the parade. Some of the dogs had fallen out. Most of the watchers had gathered on the boardwalk, but I was still able to manuever into position. By the second leg, a lot of dogs were tired. There was help available for pooped pups.