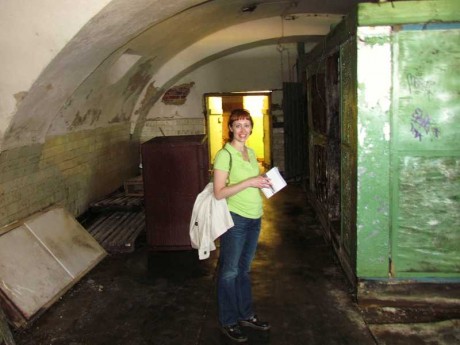 Fortress on the Sea

Our first view of Patarei prison was from the sea. Our ship docked near the center of Tallinn early in the morning. As usual Joy and I preferred walking to taking a cab, so we took a trail that ran along the sea. Buildings, the remains of Soviet industry and housing, slowly crumbled in this commercial district. The grey sky promised rain. We waited for opening time in the maritime museum and shipyard next door. The damp and dark cells lapse into silence as the tour group moves off. Joy and I are left alone to explore. Parts of the prison have seen a bit of clean up, but much remains with only sparse bare bulbs, peeling paint, and rusting steel. The emptiness plays with your head. Most room have a narrow window that looks out on the sea or the courtyards. Debris and broken furniture fill some rooms. The relics of the inmates painted on the walls tell stories.

But even more eerie are the scattered furnishings and age-old dust in the hospital section. Some spaces look like they were simply abandoned. It must have once been quite clean, quite alive with people, but one wonders if there were screams here. Perhaps blood does not stain linoleum. Estonia suffered under Soviet rule. The walls and wire filling the yards on the prison record this pain. The vast numbers of people arrested by the Soviets forced construction of new cells. These were little more than dog kennels, open to the sky, covered by wire mesh and barbed wire. Beyond lay the sky, and freedom, and guards with guns.