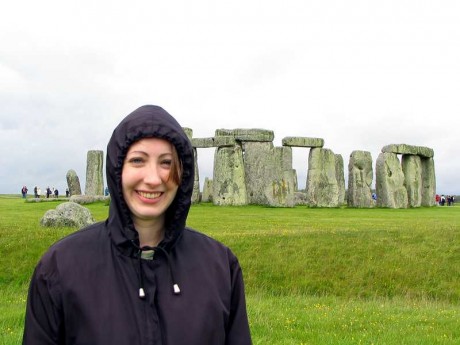 One of the benefits of BUNAC is the opportunity to get together with other visitors to Britain. We took a coach tour to Stonehenge with a group of Americans. The curse of the Stonehenge BUNAC tour was in effect; the rain started shortly after we arrived. Stonehenge is between 3500 and 5000 years old. It was built, added to, and rebuilt over many centuries. It has also been defaced and torn down several times. As a result of the recent irreverence, no one is allowed within thirty feet of the stones any longer. But the stone are still a massive presence. Stonehenge was still rural when we visited. It was in a field in the middle of a sheep paddock. A path leads around the ring of stones. A tunnel passes under the two lane country road nearby and leads to the visitor center, which is mostly underground.