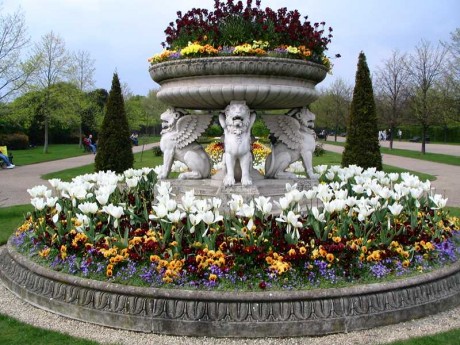 Hyde Park and Kensington Park are in the center of London. We once had to make a fast march across both parks to catch a tour coach. Duke of Wellington Circle, also known as Hyde Park Corner due to it’s location, features the Marble Arch, commemorating the Duke’s victory over Napoleon. The Hard Rock Cafe is a short distance away. However, it was closed during our visit due to a kitchen fire.

London rises to the north, so that Hampstead Heath sits atop rolling hills looking down on the city. Londoners love to get out in the sun and enjoy the warm weather. Hampstead Heath is big. It’s green. It’s wild. It’s even got ghosts. The original highwayman, Dick Turpin, attacked carriages on the King’s Road here. Walking in the various parks in London was a favorite weekend pastime for us. We lived one mile north of Primrose Hill, a prominence just north of Regent’s Park, and we often walked past the large private homes to get there from our flat. Regent’s Park is an elegantly designed formal park in the heart of London. With the London Zoo, football fields, a boating lake, the Queen’s Rose Garden, and miles of landscaped paths it is a fabulous place for a stroll in the evening. Then a short walk takes you to the Baker Street station to ride home.