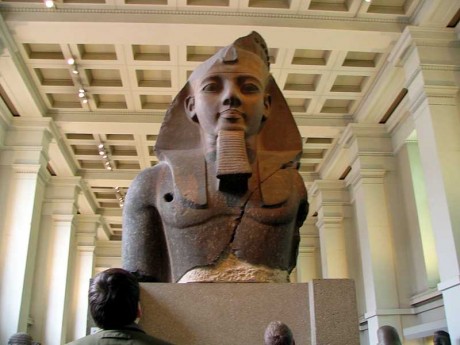 The British Museum is a stalwart emblem of the Empire. Treasures from all over the world are collected here. The museum is world renown for their Egyptian antiques and the Elgin Marbles. They also have beautiful examples of Aztec and Mayan art. The museum itself is very recognizable and massive structure, located in an older neighborhood. A complete Persian temple was unearthed at Nimrud in northern Iraq. Clay reliefs and cuneiform wall carvings are on display in several long rooms. The Winged lions guarded the entrance to the throne rooms of Ashurnasirpal II.

The most merchandised item at the British Museum is the Rosetta Stone. After seeing so many desktop models and jigsaw puzzles I was quite suprised by the size of the stone. On it’s platform the stone is as stall as a man, four feet wide and five tall. Discovered in 1799, it was the key to deciphering Egyptian hieroglypics.