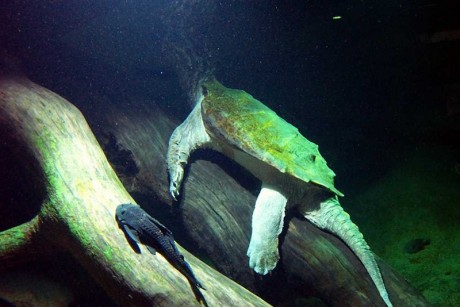 The Oklahoma Aquarium opened in 2003, and we went to see the exhibits. They have some wonderful animals, including a huge snapping turtle. I caught it resting on its log with it’s nose breaking the surface. The turtle must be three feet across! The highlight of our trip to the aquarium was the shark exhibit. The tank is built with transparent tunnels leading to a clear viewing dome beneath the water. Lit from above, the sharks swim incessantly through the water. There are three sharks and many silver fish. The fish are faster than the sharks and are safe from being eaten.